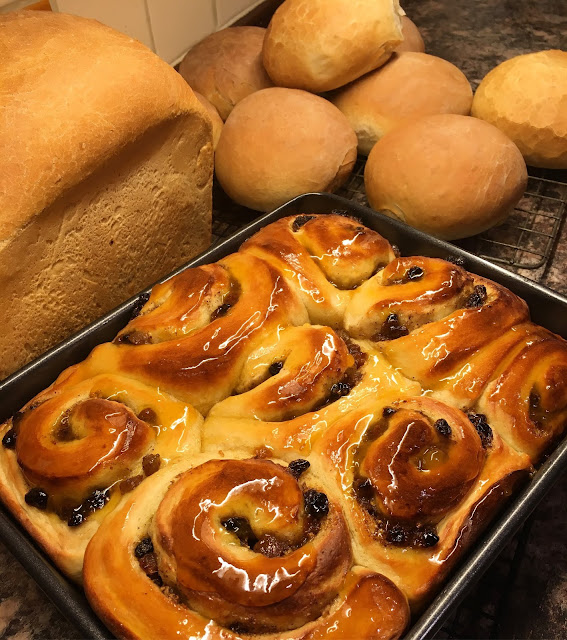 Yesterday the weather in Rainbow Towers was bleak - one of those spring days which is wet and windy and feels more like January. I decided to stay indoors in the warm and have a domestic cooking day. I love to play at being one of those "Mrs Bridges" types!

I haven't made Chelsea Buns since 1968, but the urge for something sweet and fruity had me rummaging through the recipes, and I found one by Mary Berry in her Complete Cookbook.

It was ok. The buns were substantial (2 gave me indigestion, piggy that I am) and I would double up the filling/fruit next time and put in more spice. I used apricot jam as a glaze rather than honey and it was lovely but a bit of crunchy sugar with some cinnamon in would be good too.

Make the dough in the same way as you would for bread.  I use an electric mixer. Put all the ingredients into a bowl, and turn the mixer to minimum until it's all blended, then whack up the speed to 2/3 and let the dough hook do the work by kneading it all for 3 minutes. If doing this by hand, knead for about 10 mins until smooth and elastic then congratulate yourself on your strength and youthfulness.

Rub a bowl with a little oil, and put in the dough. Cover with cling film and let rise until doubled in size. With enriched dough this takes about twice as long as for ordinary bread dough.

Prepare the filling (this is the bit I'd double up)

Leave the butter to one side but mix the other filling ingredients together and leave.

When the dough has doubled in size, (Mary says this takes about 30 minutes, but mine took an hour) turn it back into the mixer and knead on speed 2/3 for 2 minutes. Remove and roll into a 12" square. Dot the butter over the dough and spread over the fruit, then roll up like a swiss roll and cut into 12 pieces. Put them in a 7x11" tin, cut side up, and leave to prove until the buns begin to touch each other.

When risen, bake for 20-25 minutes on Fan 200 (220 non fan, or Gas 7) Mary suggests covering with foil after 15 minutes. I don't like the brown hard edges, so covered mine with foil before baking and just removed it for the last 5 minutes.

I used apricot jam as a glaze, but Mary suggests using about 4 tblsps clear honey.