50 Years in a Cupboard

If you follow on Instagram you'll know that in yesterdays heat I had to stop stitching - it was 35C and I couldn't be under a pile of wadding without melting. I was sat thinking some thoughts and had an idea.

I'm not sure if any of you out there in interweb-land watch a wonderful BBC programme called The Repair Shop, but it's based around a group of expert and extremely talented craftspeople who work in a largish barn and repair people's treasured possessions and family heirlooms. There has to be a personal reason for the repair - the idea is not to just do anything so you can go off and sell things at a profit - Great Uncle Bulgaria's long lost lemonade bottle for example, or Great Aunt Lilly's hot water bottle cover. The stories are usually a bit sentimental and, here's a confession for a hardened quilter, I'm quite often found blubbing into a hankie.

So I thought I'd have a go at Ted who's been sitting in a bin bag in a cupboard for a number of years. Who can throw their childhood teddy away?  I thought that as he was in a state, I'd do my own Repair Shop jobby on him.

I began by snipping some stitching that I'd put in as a child, and hollowing him out - a stuffinectomy, followed by a warm bath. 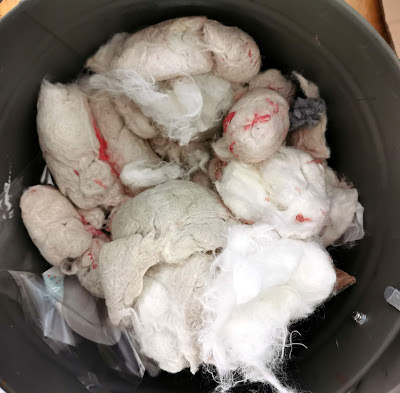 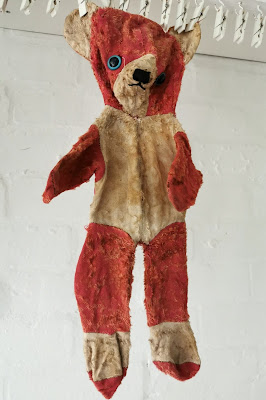 He's currently in Intensive Care Bear getting over his trauma. We haven't discussed the next stage, the stuffing, but he's been pinned by the ears to prevent any escape attempts.