He, who should be considered, has had a dressing gown which he's clung to like a comfort blanket for many years. Bless him, but the poor old thing is falling to bits (dressing gown not husband)  He's worn it to hospitals, hotels, on planes, in front gardens, and during Christmas mornings full of fun and frivolity for the last 40 years, and it is beginning to wear out and has holes popping up here and there. He has conkers in the pockets to guard against moths.

Over his 3 course breakfast this morning - he always has 3 courses: toast with marmite, toast with an egg, and another piece of toast with jam, I offered to make him a new one. Just for a brief moment he hestitated and I saw my chance. "It's ancient and needs replacing; it smells; it's in holes; it's as rough as a badgers bum" were the salient points of my argument. I don't need a new one he whined. "You do" I said, "it's in holes". He looked at me squarely and without humour and said "I can use duct tape".

You can't argue with that.

We did go to John Lewis to look at patterns for him, but he was unimpressed. I have however said I could probably draw a pattern from the existing dressing gown and bless his heart, his face lit up. So there's a job. Next problem is where to find some really horrible, dowdy, itchy, plaid wool fabric for a replacement for him.

Mmmmm, maybe the duct tape isn't such a bad idea. 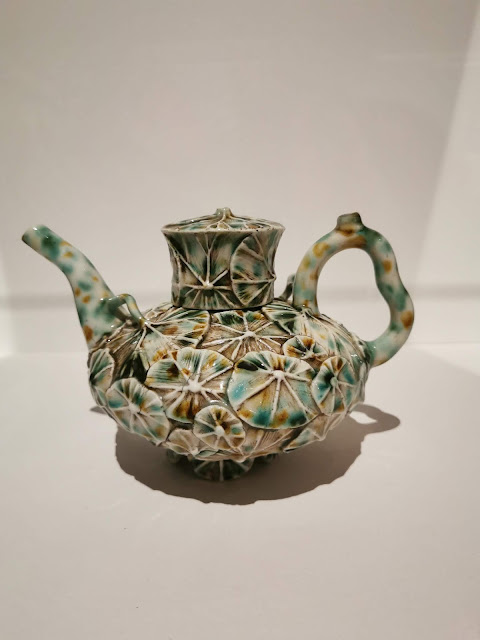 And, just because you can't have a blog without a picture of some sort, I'm sharing this lovely teapot which is on display at Compton Verney at the moment. I'd love one like this; I thought it was ancient but it isn't. It's made by an Australian ceramicist, who has it on his website for a tad over £3,000.

I'm thinking of doing a bit about the Subversity of Tea next, and have been collecting images, but that's a way off - just behind the dressing gown.