I still class myself as a beginner dressmaker but I am getting more experienced, and I've decided that I really like making clothes. I think I may have got over the horror instilled as a child by a rather fierce and unforgiving needlework teacher at school.  I used to hide in the fabric cupboard at the back of the classroom, but it appears that after 50 years, I've broken free!!

I have one or two patterns I've bought recently for various coats and jackets, but really liked the look of the model wearing her longer length coat on Simplicity 8742. 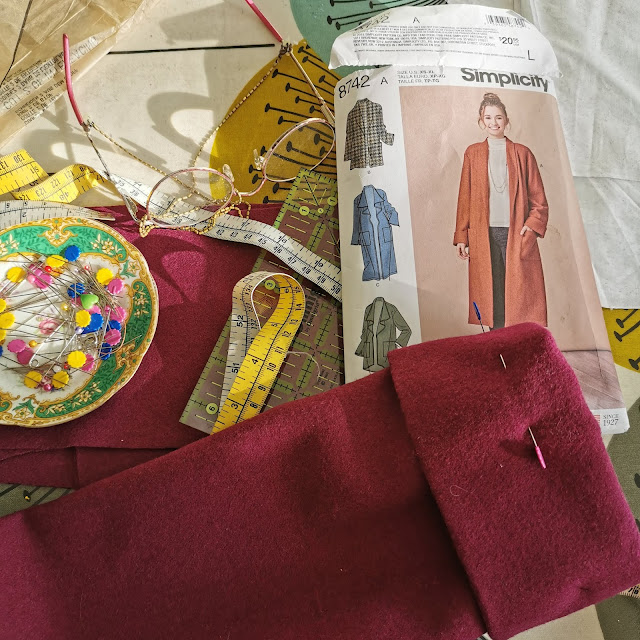 I prefer the more modern pattern makers that are around now, who use heavier weight paper rather than tissue for printing the pieces on. Liesl, Vogue, and The Avid Seamstress are definitely my favourites so far, not only for their quality but also the clarity of instructions.

I chose a warm wool in a plum colour from a local shop. I went for greens and blues but the assistant said this colour warmed me up a bit, and G agreed so I decided to try something different.

The pattern pieces and layouts were easy enough to follow, and as usual there was 1/4 to a 1/3 metre of fabric left over after cutting - enough for a bag I guess! The printed instructions were not that easy to follow. In one or two places I had difficulty understanding them (come on SlightlyArtisticWoman, they are supposed to be Simplicity itself!) Also I didn't think the pattern fitted that well when made up. I don't have a dressmakers dummy and wasn't going to bother with a toile, so maybe that's a bit my fault?

I had to alter the shoulders and could have done with increasing the darts, but because these darts were sewn in as part of the collar fitting (they run from the collar down the front behind the lapel) that would be difficult. 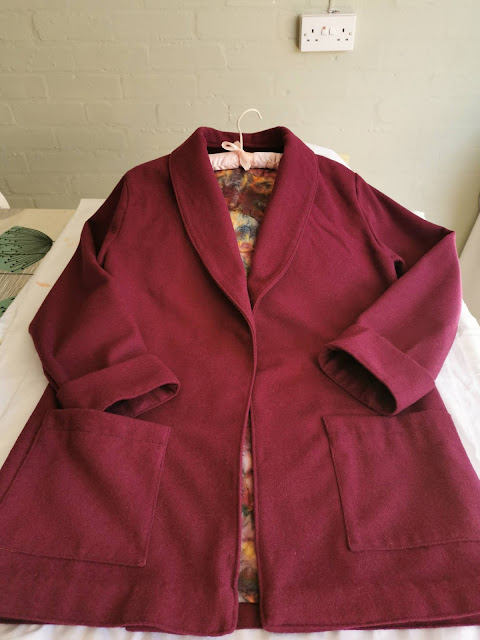 If you read this earlier posting you'll know that I am currently planning to make a pattern for G's new dressing gown - this jacket/cardigan reminds me a bit of his current one which is maybe why - and I'm being honest here -  I'm not entirely sold on it. The fit had to be adjusted by resetting the sleeve so the neck to top of arm was shorter,  and despite being cut out and made as instructed, it doesn't drape as well as I'd like at the front. I will wear it - it cost too much to not give it a go - but I won't make this one again. 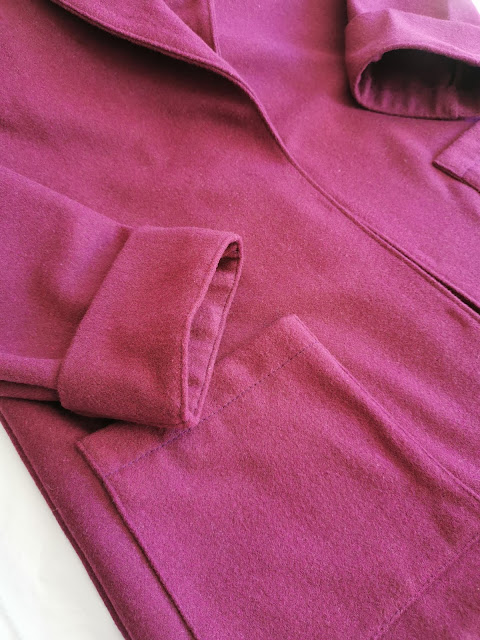 This is one of the drawbacks to home sewing I think. If you go into a shop you have a choice to try on and usually in many colours and sizes, and probably a bit cheaper too.

Still, I have fabric leftover from the rag market in Birmingham (really cheap!) so maybe I'll make other patterns in these fabrics until I find one I really like. I think I'm going to splurge out on a tailor's dummy too - looking in a mirror and trying to stick pins in your garment is not adding to my love!!