Oh, and extra big tip here: don't mark your new bust dart point on your toile with a sharpie. I have 2 permanent black dots on my new bra. 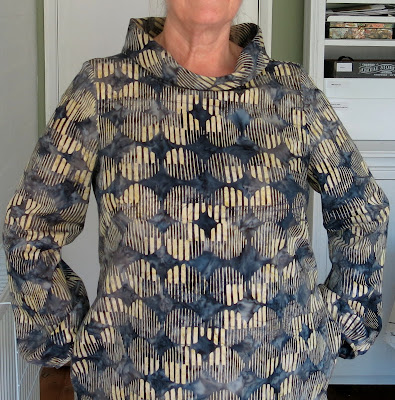 A lovely dress/tunic top pattern. The things I like about it are the neckline, shape of sleeves and the fit around the body.

The pattern is by Maven  (no affiliations) and is called the French Dart Shift Pattern.

The downsides are to do with the making, and are probably because I'm not that experienced in putting things together yet. Explanation below.

Size wise- the body measurements given on the pattern are accurate. Patterns usually have a lot of ease and I can get away with making a 12. I'm a dress size 12 to 14 (Marks and Spencers!) but had to make this as a 14/16. I didn't find much ease given in the pattern and had to go up that extra bit. 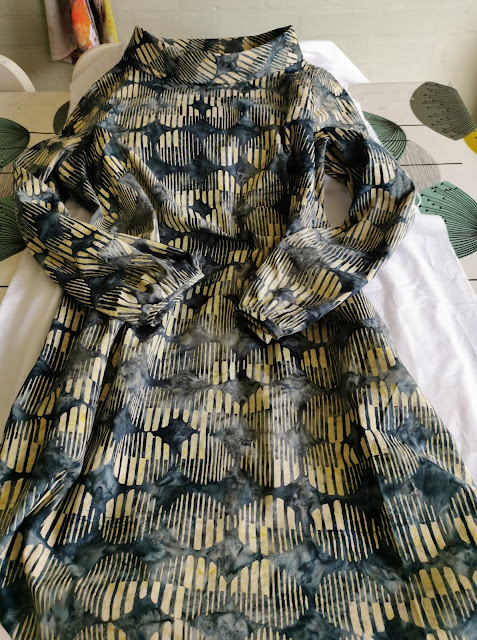 The pattern comes in a thin card packet/envelope, with thick paper sheets with the printed pattern on. There is a separate little instruction pamphlet which goes through things step by step. I have a slight problem with patterns over the bust (apparently they generally draft patterns with a 36C in mind) so made a toile as suggested. My material was far too expensive to chance.

The toile was made in white cotton with the seams on the outside so that I could alter more easily. It was obvious to me on the first toile, that the bust dart came up too high (it's my age - what can I say?!). It was also ever so slightly too tight over the bust but nowhere else.

To remedy this I cut the front as a size 16 with size 14 shoulders and armholes, and length, but size 14 back.  I also redrafted the front darts so that they came 1" lower down. To do this simply put in a new front dart point (the little black blob) and redraw the dart lines to match this new point, but make sure the new lines goes to the old dart points at the side of the garment.

If that all sounds complicated and the darts are in the right place for you but it's still a little tight, go to the Maven website where there is a step by step alteration you can make to give you more room. 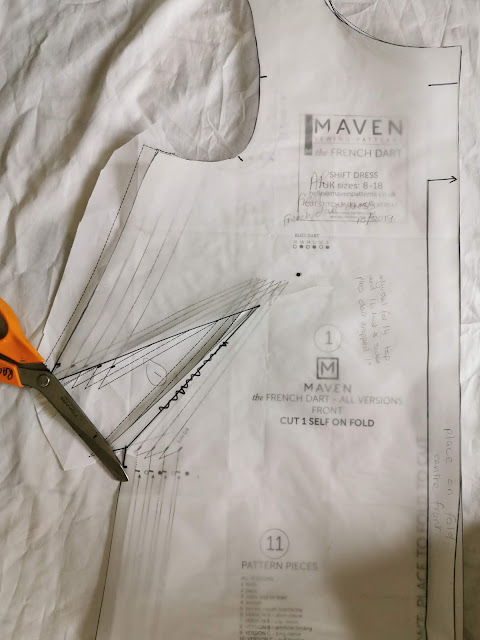 The second toile was a fag but worth doing as it confirmed that the new darts suited me better.

I found one or two things a bit tricky;  the pocket bags, some instructions, and the cuffs. I've come across better ways of doing both and will do differently next time I make this tunic. A tighter cuff either with elastic or wider with a button fastening would be better. The most successful way of putting a pocket in that I've come across is on the Assembly Line dress I made a few weeks ago.
I found the instructions for both bits a little complicated and was puzzled at points - the very first instruction was to do a taped neckline - where did that sneak in! What tape! I worked it out obviously but worried what was in store with the rest of the instructions!

I had fun making this dress, and I do like the fit and style - but will be brave enough to do things a bit differently next time I give it a go.